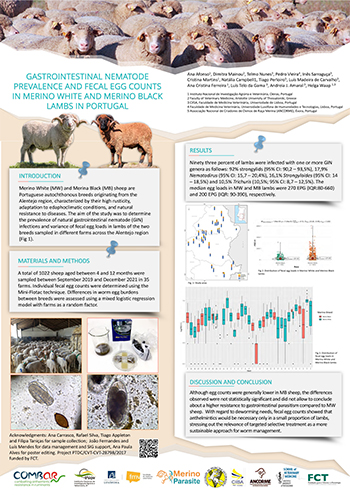 Merina Branca (MB) and Merina Preta (MP) sheep are Portuguese autochthonous breeds originating from the Alentejo region, characterized by their high rusticity, adaptation to edaphoclimatic conditions and natural resistance to diseases. The aim of the study was to determine the prevalence of natural gastrointestinal nematode (GIN) infections and variance of fecal egg loads in lambs of the two breeds sampled in different farms across the Alentejo region. A total of 1022 sheep aged between 4 and 12 months were sampled between September 2019 and December 2021 in 35 farms. Individual fecal egg counts were determined using the Mini-Flotac technique. Differences in worm egg burdens between breeds were assessed using a mixed logistic regression model with farms as a random factor. Ninety three percent of lambs were infected with one or more GIN genera as follows: 92% strongylids (95% CI: 90,2 – 93,5%), 17,9% Nematodirus (95% CI: 15,7 – 20,4%), 16,1% Strongyloides (95% CI: 14 – 18,5%) and 10,5% Trichuris (10,5%; 95% CI: 8,7 – 12,5%). The median egg loads in MW and MB lambs were 270 EPG (IQR:80-660) and 200 EPG (IQR: 90-390), respectively. Although egg counts were generally lower in MB sheep, the differences observed were not statistically significant and did not allow to conclude about a higher resistance to gastrointestinal parasitism compared to MW sheep.  With regard to deworming needs, fecal egg counts showed that anthelmintics would be necessary only in a small proportion of lambs, stressing out the relevance of targeted selective treatment, as a more sustainable approach for worm management.

Acknowledgements: this study was funded by Project MERINO parasite PTDC/CVT-CVT-28798/2017